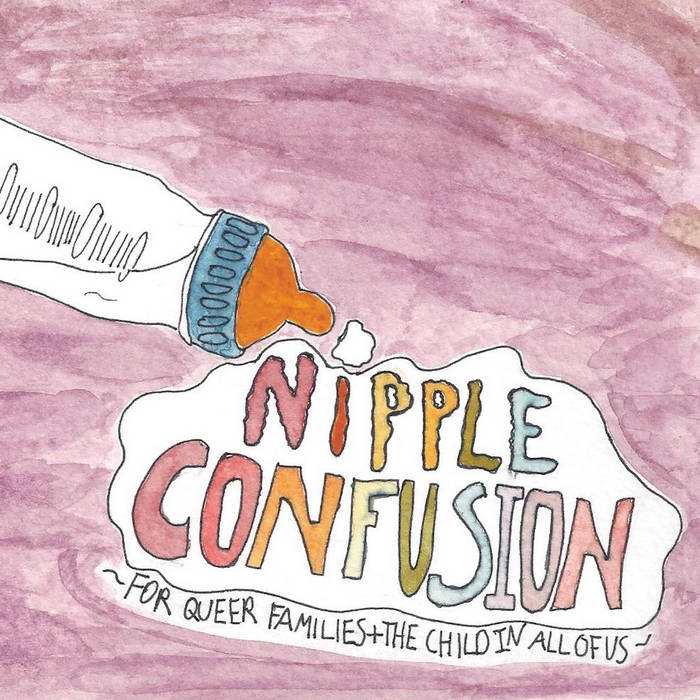 xannifer My kids deserve to live in the world this album is building. <3 Favorite track: The Wheels on the Bus of the World to Come.

Nipple confusion: the tendency of an infant to unsuccessfully adapt between drinking milk from a parent’s body and bottle-feeding... after a bottle nipple, infants can forget the proper suction technique for a human nipple and/or be frustrated at the slower flow of human milk.

Conceived on a random afternoon hanging out with lots of queer friends and a baby, Nipple Confusion is inspired by a little one and the joyful mish-mosh of bio and queer family spread out over the U.S. and Canada who love them. (Conception - “Hey, Nipple Confusion would be a great band name! Let’s write a title track.”)

With songs written over a fourteen-month period, beginning with their mama’s labor and ending a little after their first birthday, Nipple Confusion addresses a breadth of topics, from parenting methodologies, to farts, to the importance of feeling your feelings. Unapologetically Jewish, queer, and political, you & your little friends and big friends can jam to niggunim about pooping, enjoy songs about bears, and envision a world without capitalism all on the same album. The songs on this album are for everyone, large and small, and are especially for families where “the love/around you/doesn’t look like a certain way”. This album is for you, in celebration of you, in a world that is better because of your light and goodness -- for queer families, and the child inside all of us.

Appreciations:
To Ian, for taking on this amazingly bizarre project with so much generosity!
To our many families, I am so glad we get to do so much together, support each other the whole way through, and sing together!
To Loolistown, who lights up a whole city’s worth of joy in my heart.

CD Production sponsored in part by "S.T.E.V.E. -- So That Eden Village Employees (Can Do Anything)"

Raised in Michigan, she splits her time between Millerton, NY middle schoolers, and teaching music at a camp in Putnam Valley, NY.

Bandcamp Daily  your guide to the world of Bandcamp